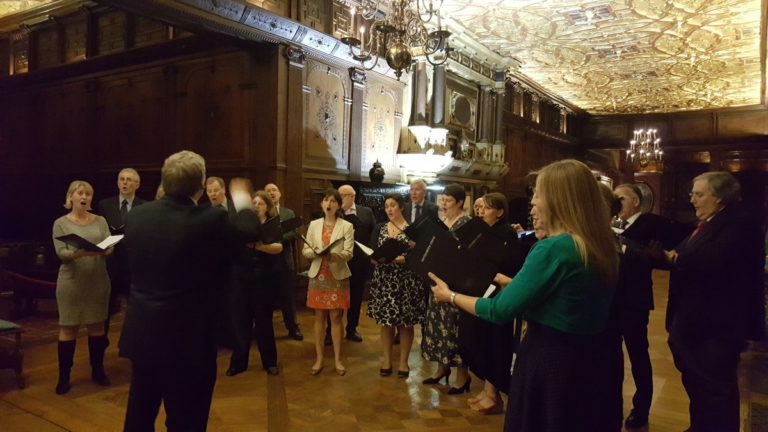 Hertfordshire Chorus has been asked to sing in the final concert of this year’s Hatfield House Chamber Music Festival in September – the third time we have been invited in the seven years of the Festival.

The Festival was launched in a special concert in the Marble Hall at Hatfield House recently and a small group of singers sang an extract from Brahms’s Ein Deutsches Requiem as a taster for the performance of the full work in the Festival itself. The concert also featured fabulous performances by some of the people who will be appearing in the Festival, including cellist and Artistic Director of the Festival Guy Johnston, acclaimed tenor James Gilchrist and amazing pianists Anna Tilbrook, Tom Poster and Melvyn Tan.

The choir then entertained all the guests with some unaccompanied singing at a reception held in the Long Gallery – “.. beautiful contributions to the evening ..” was just one of the plaudits we received and we now look forward to September and the main event in what is a very high quality four-day Festival.

The theme for 2018 is Brahms and Friends. This year the festival will run from 20th September with the finale on the 23rd. The reputation of the festival has grown significantly in the seven years since it began. Music is high quality and played in atmospheric surroundings. The choir at the festival in 2017 singing Haydn’s Creation

We have some fantastic concerts in 2018 including a reflection on WW1 at Watford Colosseum with BBC Concert Orchestra, Sam West as narrator, to be broadcast on BBC radio 2. Read about our other 2018 concerts here.