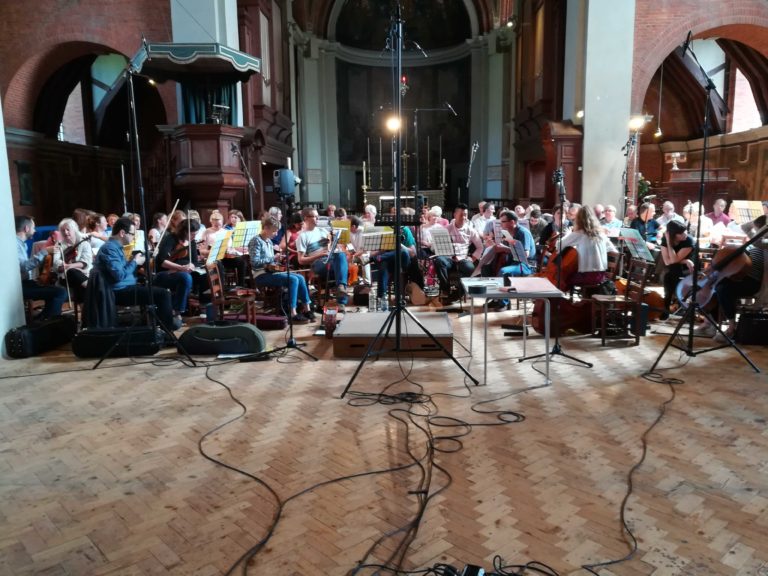 How do you launch a recording of lovely music written by a little-known composer like Michael Hurd? By singing it in a concert of course! So we’re really pleased to launch this recording on the label Lyrita Recorded Edition at a concert in St John’s Smith Square on the 14th April 2018. How this recording came about

This was another new experience for Hertfordshire Chorus. The British Music Society approached us about recording five works by British composer Michael Hurd.  Michael Hurd died in 2006, aged 77 after 50 years composing a wide variety of music.  The BMS established a charitable trust to administer a legacy from his estate, with the aim of fostering and encouraging recordings and performances of his music. He is perhaps best known for his Jonah-Man Jazz, sung by countless schoolchildren over the years. Our task was not only to record the five compositions but also to project manage the recording! No small undertaking!

Music Director David Temple and Operations Director Robin Seaman set about organising the long list of things that had to be done.  St Jude’s Church in Hampstead is well known for its acoustic and is often used as a recording venue. We approached the London Orchestra da Camera, a regular concert partner. Place and orchestra sorted. Next task was to find a soloist for one of the pieces and we were very pleased to discover mezzo-soprano Marta Fontanals-Simmons.  All coming together – now we had to find a producer and recording engineer and turned to Gareth Williams, with whom we have worked a number of times. Finding the people and venue was only half the task, since we also had to find dates when all were available. No easy task when everybody’s diaries were so full. And don’t forget our own singers and their availability! A complex thing to organise and the recording dates seemed to be upon us very quickly.  So on a rainy morning on the 20th May 2017  the choir, orchestra, conductor and recording crew gathered at the church.  A second full recording day was held on the 3rd June 2017  when our soloist joined us.  The church needed to be set-up early in the morning on each day and then, recording finished, everything had to be cleared away, equipment packed in the van and the church returned to its primary function as a place of worship ready for the services the next day.

So what of Michael Hurd’s music did we record?

They were two long and tiring days of recording. Occasional interruptions included emergency vehicle’s sirens and  aeroplanes passing overhead.  A couple of the minor inconveniences of non-studio recording, especially in London!  But the experience was utterly rewarding.  We discovered some gems, really lovely music that was a joy to sing. Recording over, we go back to our other work, sad to leave this music behind for the time being. We do hope that Michael Hurd’s choral music will be rediscovered through this and other recordings.

So to conclude this blog the recording release date was the 6th April 2018. We also made Michael Hurd’s music the centrepiece of our concert on 14th April 2018 joined by our sister choir Crouch End Festival Chorus and the original commissioner of The Phoenix and the Turtle.

by Andrew Achenbach in  Gramophone