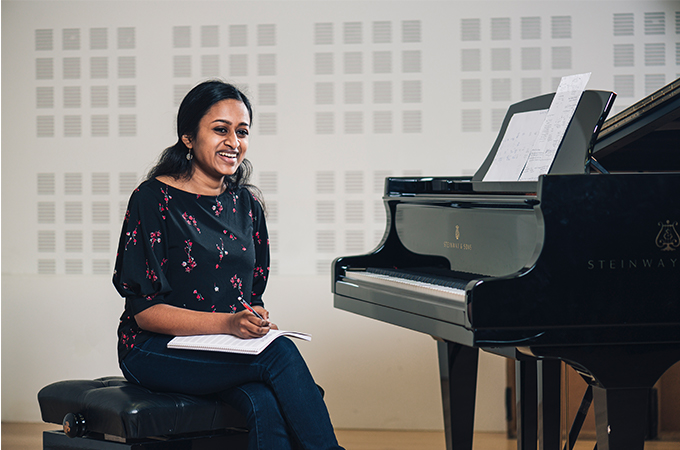 I first met Shruthi Rajasekar in January at the Royal Albert Hall at an event to showcase the young composers involved with the National Youth Choir of Great Britain and its chamber choir.  We shared much common ground and I remember her being very taken when I told her that Hertfordshire Chorus had commissioned Will Todd’s Mass in Blue, a choral work performed all over the world. I decided to keep in touch with Shruthi and spent some time researching her music.

Over the first lockdown period, when Shruthi was back home in Minnesota USA, we enjoyed several video chats where we discussed all manner of musical ideas and it soon became obvious that Shruthi was a composer I had to work with. I had already witnessed first-hand her expertise as a choral composer, but it was when I learned more about her background and cultural experiences that I realised the possibilities of a commission which combined the music of the East and the West.  This idea is not new of course but the knowledge of earlier musical collaborations e.g. George Harrison and Philip Glass with Ravi Shankar, if anything inspired me to explore the possibility of a work from Shruthi.

What emerged from this was the proposal of a commission from Hertfordshire Chorus.  The chorus’s Council and its members responded enthusiastically to this idea and Shruthi has been commissioned to write a work based on the legendary Indian woman, Sarojini Naidu, who was active both politically and also as a creative artist.

Shruthi’s background is based on both Indian and Western classical music.  The finished work will show both sides of her musical heritage. As well as choir, soloist and orchestra, there will be a small ensemble of Indian classical instruments and the overall sound world will celebrate the fusion of these styles.

It is hoped that this performance of the new work will help to diversify the choir’s audience and also its membership. Whilst the vast majority of the choir’s music experiences are within the conventional classical repertoire, we have explored other musical genres, particularly jazz, culminating in an appearance at the EFL London Jazz Festival in 2017.