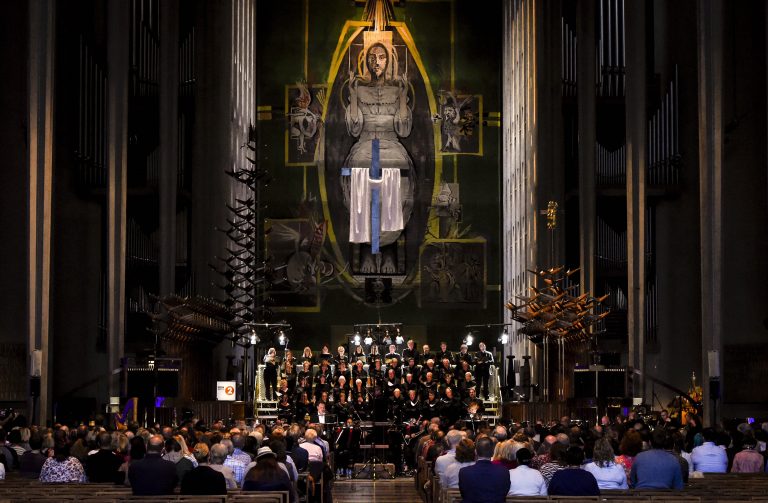 Hertfordshire Chorus was very pleased to have been asked to sing in a special performance of War Horse – The Story In Concert  for BBC Radio 2 in the special venue of Coventry Cathedral on Friday 18th May 2018.  The concert was part of Coventry’s Big Weekend Fringe Festival and was recorded for later broadcast. It also featured acclaimed actors Juliet Stevenson and Simon Callow and the wonderful BBC Concert Orchestra under the direction of conductor David Charles Abell. The story of the book and the play

War Horse has been a huge success in recent years. The story is by now well-known – at the outbreak of World War One, Joey, Albert’s horse, is sold to the army and sent to France, where he experiences the conflict in the trenches, is bought and sold many times before ending up in No Man’s Land. Albert never forgot his beloved horse and enlists to follow him to France, with both of them returning at the end of the War.

The book was written by Michael Morpurgo in 1982 but it was not until it was adapted for the National Theatre in 2007 that it really made an impact. It reached an even wider audience through the 2011 film directed by Steven Spielberg.

The concert version, for choir, orchestra, soloist and narrators was written by Adrian Sutton and was performed in 2016 at the Royal Albert Hall.

This concert was broadcast on BBC Radio 2 Friday November 2nd at 7.30.

The choir has an exciting series of concerts, one highlight of which will be another partnership with the BBC Concert Orchestra to remember WW1 with Britten’s Ballad of Heroes, Bliss’s Morning Heroes and Ivor Gurney’s A Gloucestershire Rhapsody.